This Week In Reading: The Optimist’s Telescope 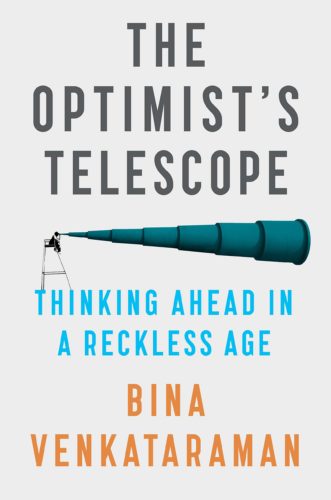 [Disclaimer: Bina Venkataraman is a close relative and, in my opinion, an excellent science journalist.]

It is no coincidence that The Optimist’s Telescope: Thinking Ahead in a Reckless Age came out a) just as I have begun giving talks about the future of geoscience and its applications in a world powered by more than fossil fuels, and b) at the same time as the formation of a Society of Exploration Geophysicists strategy group dedicated to innovation in capabilities and opportunities for early-career applied geophysicists. The new normal of volatile economies, demographic changes, increasing globalization, climate change and shifting priorities in governance obviously have many more than future-focused geoscientists like me concerned. And not just for ourselves but also and especially for those to whom we leave this world. What will our legacy be? Leaving problems for the kids to work out or searching for and starting solutions?

My talks vary according to the audience, but adhere to and are constructed around the three main components of the future: People, Practice, and Philosophy. First come the People. Who’s We? Who are the individuals and societies we consider in our collective future? Next, Practice. What tools do we have, and which ones need creating? How and why are they used? Finally, Philosophy. Are we mentally and emotionally mature and philosophically capable to talk about the future? Can we change? The philosophy of the futurist must involve an acknowledgement of human interdependencies as well as deep introspection and more open conversation, and is what Optimist’s Telescope opens with. Bina cites the contemplation of human myopia by early Western philosophers such as Aristotle and Plato to modern psychologists: Why this bias for the present when we know it is fleeting and is the future’s past? In truth, thinking about the future isn’t even that profound or ponderous for, as the book says early on, What appears our doomed fate is, in reality, a choice. Help yourself and others make good choices that will help us all down the road. Even when boiled down to this simple, accessible problem, the question remains: Can we change?

Yes, we can change, Bina argues, because we have. As I sit in an industry founded on long-term vision but is increasingly funded by impatient stockholders and constrained by their attendant quarterly demands, I read tales of finance houses that gave up short-term earnings statements and annual bonuses as measures of success. I learn of fishermen who curbed their unnecessary practice of resource over-extraction and instead put a plan in place to grow sustainable populations for the future. And I smile at cities that have banned urban development and suburban sprawl hastily constructed on flood plains, subsidence zones and natural coastal barriers. Beyond provoking thought, it is in each chapter being a concrete example of an implementable solution, sustainable practice or failure analysis where The Optimist’s Telescope excels. Furthermore, Bina’s reporting skills helped her put together each of these examples as case studies but first as stories. Empathizing with the story and people of the matter and to the tick of the long clock versus embracing or rejecting it with respect to momentary political ideology may be a better way of enacting longer-lasting and much-needed change.

New problems need new solutions but there is also wisdom to be had from histories and cultures we refuse to consider in our increasingly global scape. Bina goes into this in some detail with takeaways that we can use today and in our seemingly varied communities. We in the 21st-century west are not smarter than ancient Pompeiians or more advanced than the inhabitants of rural Cameroon. In fact, hiding our primitive and failing institutional practices behind the veneer of flashy technology, language-bending buzzwords and crisp suits is so much worse.

Overall, The Optimist’s Telescope is a well-researched and practical yet impassioned plea for a futures-based approach to solving the problem of our continued co-existence on this planet. As I imagine geoscience curricula for schools and universities, we must start with what needs addressing before we routinely pick items for students’ toolbelts. I greatly recommend this book or select chapters to accompany science, philosophy and science communication classes at all levels of education so that it may help students in creating their own future, asking the right questions on its behalf, and designing their own tools to make that future real and good. And, speaking of growing respect for delayed gratification, I can’t wait for the sequel to this book containing more stories and visions of the future.

My mother passed away in my arms this morning. The