by Maitri on May 8, 2019
in geology, journalism, science & technology, wisconsin, women in science 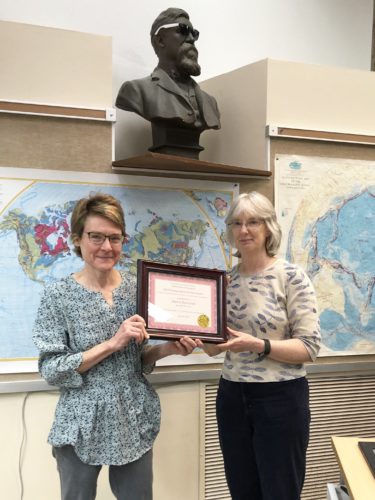 Marcia Bjornerud (left) receives the University of Wisconsin Geoscience 2019 Distinguished Alumna Award from Laurel Goodwin. TC Chamberlin (Wisconsin geologist and founder of the Journal of Geology) says, “Deal with it.”

I spent the last weekend of April in Madison for the University of Wisconsin Geoscience Department alumni reunion weekend. There is no feeling like entering Weeks Hall, that squat and escheresque monolith dedicated to Earth and its study. It’s not just the building that defies spatial-temporal relations, but also the very rocks and memories it contains. So different and yet home. It was nice to visit the geology museum, watch new students work where we worked, and to be inside it all again, even if for a short while. On Wisconsin. On.

This year, the Department had the good sense to give the Distinguished Alum award to Marcia Bjornerud, professor of geology at Lawrence University and author of two remarkable and remarkably relevant books which you may have read or, at least, heard of: Reading The Rocks: The Autobiography of the Earth and Timefulness: How Thinking Like A Geologist Can Help Save The World. Marcia is also a contributor of essays to Wired, The New Yorker and The New York Times. A full-time professor and researcher and acclaimed author, Marcia does what all geoscientists should strive for – good science and good writing about science.

Many were unable to attend the alumni gathering. For them and for those who love Marcia’s writing and asked to read her acceptance speech, here it is. Thank you, Professor Bjornerud, for generously sharing your words here and elsewhere, and for being one of the greatest ambassadors of our planet. As you say, “Now those of us who have been fortunate enough to learn the language of the Earth need to be more deliberate about sharing its messages with others.”

Thank you Laurel [Goodwin], I’m honored and grateful to receive this recognition.

I feel so lucky to have found my way into the geosciences and in particular the department here at Wisconsin.

I’d like to share briefly my reflections on how profoundly my four years in Weeks Hall affected the subsequent course of my life an account that is probably parallel to stories many others here could tell.

In retrospect, I realize that my path to UW Madison geosciences began with an early fascination with Svalbard, an archipelago in the high arctic.

I remember first learning of its existence when in the 8th grade. It was a snow day and I was paging idly through our family’s world atlas. I came to a map of time zones around the world, with the world divided into mostly longitudinal stripes of alternating pastel colors. But there were several places Antarctica, outer Mongolia, and a place I’d never heard of Svalbard, in the high arctic that were colored grey. The legend said that these places had ‘No official time.’

I was captivated by the idea of places that had resisted being shackled by measures of time. Years later I would learn that the ‘no official time’ designation was the result of a long-running spat between the Norwegians and Russians about whether to set the clocks there to the hour in Oslo or Moscow, but the place stuck in my head as somehow exempt from time.

That impression was underscored when, as an undergrad in geophysics at the University of Minnesota I happened to go to an exhibit at the Minneapolis Institute of Art on Scandinavian photography. The exhibit included haunting images of the ill-fated Eagle expedition, an 1897 attempt to fly over the North Pole in a hot air balloon.

The balloon crashed on one of the most bleak and remote islands in the Svalbard archipelago and no one knew what happened to the expedition until more than 30 years later when the wreckage was discovered and film that was in the cameras at the site was developed, silently documenting the crash and the slow demise of the explorers.

For me, this only deepened the mystery and allure of Svalbard, the place outside time.

So when I was in the process of applying to graduate schools, and I learned that a structural geologist named Cam Craddock at UW-Madison had a NSF grant that was sending students to Svalbard, it felt like it was my destiny to come here.

It’s hard to overstate how much my graduate fieldwork in Svalbard influenced me scientifically and personally.

First, Cam gave us the opportunity and then stepped back and let us define our own research. This was of course terrifying but in the process we learned how to work independently and teach ourselves what we needed to know, a skill that has been essential for me as a professor at a small college in a department of only three, in which each of us must teach a wide range of courses, many well outside our specialties.

And the experience of organizing logistics for a 2-month field season in the high arctic later proved invaluable to me as a single parent of 3 boys.

I feel incredibly privileged to have had the opportunity to make some of the first geologic maps of one of the last places on Earth to be mapped and to define for subsequent workers what the scientific agenda for that place would be. I developed deep friendships with those who shared the wild beauty of that place, at a time when it was beyond the reach of the outside world. Even though they were often not people who in everyday life I might have chosen as my friends, they became soulmates. We trusted our lives to each other.

I want to mention in particular Jay Nania, who went to Svalbard the fist year I did as our field assistant and then again the next year for his own masters work. Many of you here will know him as a tireless champion for the department as a member of the Board of Visitors. His ebullience and big Italian heart warmed everyone around him.

Fieldwork in Svalbard also opened up a world of connections for me to geologists from around the world. I have to mention that against Cam Craddock“s objections, I took both Norwegian and Russian language courses here at Madison. The connections I made through Svalbard work led to a postdoc at the Byrd Polar Research Center at Ohio State a place with many UW geoscience connections and two field seasons with the Canadian Geological Survey in northernmost Ellesmere Island, then back to Svalbard with the Norwegian Polarinstitutt, then to a sabbatical in mainland Norway and indirectly to the South Island of New Zealand.

But the austere high arctic landscapes burrowed deepest into my psyche – forever changing my perception of being a human on Earth and profoundly influencing my teaching and writing.

Some other lasting imprints of graduate school days here include the extended field trips faculty ran Cam Craddock“s trips to Wyoming and around the shores of Lake Superior; Lloyd Pray“s to the Ouachita Mountains and Guadalupes. It wasn’t until I was a faculty member that I understood what great effort and stress goes into running those trips.

I think it’s important to acknowledge that at that time there was some tension in the department between the old guard, who were largely field oriented, and new faculty who were bringing modern quantitative methods and analytical instrumentation to the geosciences. But in retrospect, being at the cusp between these generations was an optimal moment and enabled me to define a distinctive niche between field-based investigations and modeling and quantitative analysis.

Faculty who shaped my thinking include

John Valley who arrived from a faculty position at Rice the same fall I entered grad school here. His metamorphic petrology course was a transformative intellectual experience for many of us.
Herb Wang“s Finite Element modeling course was similarly foundational.
Carl Bowser taught a biogeochemical cycling seminar that was far ahead of its time.
Bob Dott, was of the older generation but continuously embraced new ways of thinking, and who instilled in me and many others an appetite for learning the history of geology which I turn share with my own students.
And Gordon Medaris was – and continues to be – a beloved mentor to me and my own students – through our shared interests in the rich and complicated Proterozoic rock record in Wisconsin.

I still regret that I never had the chance to take courses from Dave Mickelson – or from Mary Anderson, then the only woman on the faculty.

I won’t pretend there weren’t difficulties for women students then, given the dearth of female mentors. But I was lucky to be in a cohort of strong sister students: Judy LaKind, who now runs her own environmental consulting firm in DC area, Amy Cheng, who worked for Chevron, then GoCad, writing software all oil companies use, Claudia Mora, recent past President of GSA, Jean Morrison, associate provost at USC now Provost at Boston University. And I want to remember administrative assistant Ruth Dresser, who was like a protective aunt to us.

They gave me the courage to take a faculty position at Miami of Ohio, where I was the only woman in a department of 13 and earned tenure but left because the call of Wisconsin’s rocks and landscapes was too great.

Now, interestingly, two of Cam Craddock’s granddaughters, Annie and Erica, have been geology majors and my academic advisees at Lawrence.

I feel so lucky to be in a field that nourishes both my mind and soul. Geology is unique in how it brings people together at a very human level across generations and cultures. There is something intimate about sharing both the physical experience of specific places and the intellectual intensity of interpreting them that’s what all of us here share, whether we overlapped on campus or not.

Now those of us who have been fortunate enough to learn the language of the Earth need to be more deliberate about sharing its messages with others.

50 miles across and as flat as a wet pancake. I ca

21 years after I heard about miniature/manuscript